For this version, OSC Query requests from TWO are manually triggered by pressing a button on the PropertyPanel of the newly introduced “OSCQueryAddress”: 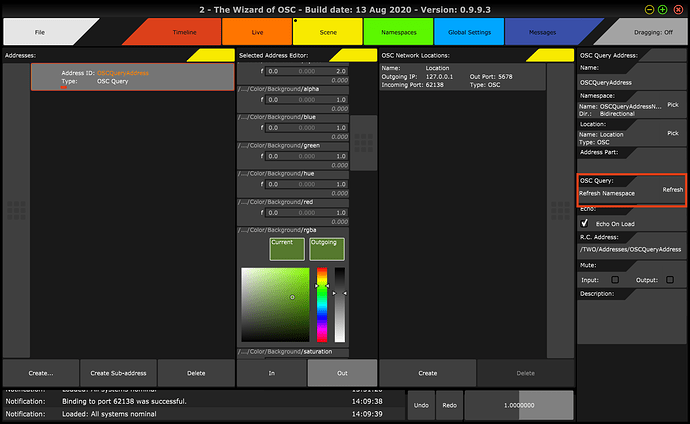 Bounjour IP & Port discovery are not yet supported in this release (0.9.9.3), instead IP and in and out Ports for the Queried application need to be set for the “Location” assigned to the OSCQueryAddress.

I’ve also experimented with splitting the created namespace up into an Address hierarchy, so that e.g. each individual fixture appears separately, following the principles described when using Resolume with two described in this post. 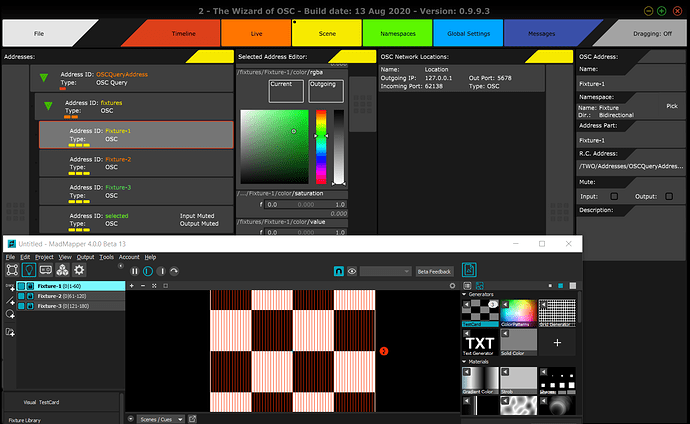 It would be interesting to see how OSC Query could be amended so that such a hierarchy could be created automatically - for the moment the separation of the namespace for Fixtures and their instantiation is manual.

While imperfect, there is a mechanism in OSC Query, where a node communicates the bounds of the sub-instances it can contain: “Instance Bounds”. If min==max, it has no sub-instances. Otherwise, any sub-node can be treated as an instance. This is not ideal, just as is the .1-.n notation of libossia, in that the node can only hold sub-instances, not a mixed sub-hierarchy.

But it is a step in the right direction, and I will look into finding OSC-Query capable applications which advertise “Instance Bounds” (MadMapper doesn’t yet), and use these in the next release of TWO.

Until then, let me know here how you get along when using TWO and MadMapper together!

And before I forget, here are the .two files I created for the above screenshots: